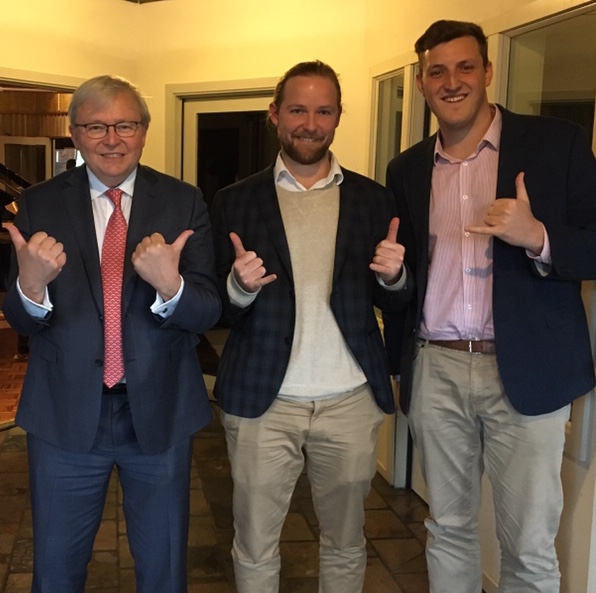 Kevin Rudd came from humble beginnings in country Queensland to become the 26th Prime Minister of Australia in 2007. He is author of the books ‘Kevin Rudd – The PM Years’ and ‘Not for the Faint Hearted’.

Mr Rudd is currently the President of the Asia Society Policy Institute and is living in New York. On his most recent return visit to Australia, we were able to sit down and have a chat.

In this episode we talk about:

– why young people (including us) are disengaged with politics

– the rising super-powers in of the developing world

Kevin Rudd: “The AI fight between China and the United States has only just begun”

In a conversation due for publication on Wednesday 21st August, Kevin Rudd joins Adam Ashton and Adam Jones on an episodes of the What You Will Learn podcast to discuss how Australia currently fits into the global political landscape.

Melbourne, Australia Aug. 20, 2019 –  Mr Rudd, the 26th Prime Minister of Australia, discusses the three vital issues facing global politics today, then explains exactly what everyone in Australia needs to do if we are to remain relevant in international relations.

Australia has always been ‘the lucky country’, but Rudd fears that we’ve now fallen too far into a state of becoming ‘the complacent country’. The industries that have supported our nation for decades may not be well positioned to continue to drive strong, sustainable economic growth for Australia’s future. Instead, there are new ideas and fresh approaches that we all must bring to our life and work if we are to continue to compete on the international stage. Rudd has advice for people at every level of society, from individuals to institutions to government, making this hour of conversation an absolute ‘must-listen’.

What You Will Learn is a weekly book podcast hosted by young Melbourne duo, Adam Ashton and Adam Jones, where they share the best bits of the best books. They summarise the need-to-know information to help listeners get the most out of a book in the shortest amount of time, offering lessons and takeaways that can be applied to help improve their everyday lives.

On this upcoming episode, an interview with Kevin Rudd, the former Prime Minister identifies the three major political issues we face today:

Thankfully, Rudd offers some semblance of hope: “All of the big questions (of today) actually have answers… it’s frankly meshing the answers with the rolling shit of politics which is really hard”.

For further information about the episode or more quotes from the conversation with Kevin Rudd:

What You Will Learn podcast